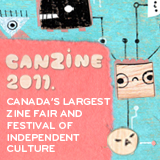 I finally started unpacking and sorting out my stuff from Word On the Street. Mainly because I’ll be needing it for Canzine next weekend! (But also because something was starting to smell funny.)

I’ve never been to Canzine, but everyone I know who has says it’s a great show and according to the website, there’s a lot of fun stuff going on this year. It’s super-cheap to get in; $5 in advance or at the door, and that comes with a free copy of Broken Pencil magazine. If you’re an advance ticket buyer, they have some pretty nice packages in the online store and a separate entrance for you so no waiting in line.

Brian and I will both be there, but we haven’t gotten our table assignments yet so I don’t actually know if we’ll be seated anywhere near each other or not. Which reminds me, if you haven’t been to Brian’s page in a while, he’s just started posting Don River. It’s about some next-level stuff going on in the Don River and probably my favourite of his stories so far.

I’ll have lots of copies of Starting Tomorrow available as well as the first Yoga print in different colours, (collect all four!) I am also taking pre-orders so if you would like me to have an artist edition (or two! :D) ready for you to pick up at the show, just drop me an email. If you were looking for prints of a specific comic or original artwork, please let me know by Wednesday so I can have it ready.