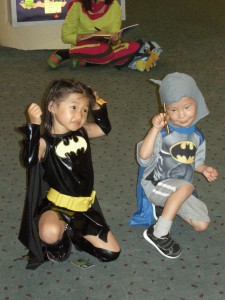 I’m slowly but surely starting to rally after four very fun, very exhausting days at Fan Expo. Thanks for your patience on yesterday’s comic, I’ll have Wednesday’s up tomorrow afternoon and with a bit of elbow grease, have Friday’s back to regular posting time.

Alright! So…Fan Expo! Where do I begin?

As I mentioned before, this was my first show with the new book and I can’t seem to find the words to say how delighted I am with how well it was received. I’ve been very lucky, my readers are the nicest people, but this was the first time that some of you who have been reading the strip online actually looked for me at a show. It was very flattering and really delightful to have faces to go with some of the comments. So thank you very much for that and for buying the book, the support is beyond encouraging. (I’m still grinning about it.)

I met some new readers too. One pair came with a very funny, small-world coincidence but whether anyone was friends of friends or not, it was pretty wild to know people are reading this who aren’t in fact, related to me.

The photos are currently uploading to the Promises Facebook page. As always there was a pretty good turn out of Cos Players. Although I have to admit, I found the proliferation of Dr Who(s) a little disappointing. Where’s the creativity? I guess that’s a bit salty of me, but some of these people go all out and it hardly seems fair to lump the full body, hand made, Gundam costume in with Mr. Bowtie.

In other news, I did an interview at the show with Kurt over at TGT media. Don’t know when that will be posted yet, but I will be sure to link it when I find out. We talked a bit about a page I did for their Webcomics What’s Cooking book a while ago. It’s a good project. Lots of  comics folks involved and the proceeds will go to food banks in Canada and the US.

Lastly, I’ve finally started putting Starting Tomorrow into some stores! Big thanks to Dragon Comics in Guelph and the Silver Snail in Toronto for picking it up. Two of my favourite stores just gave me one more reason to tell everyone I know to shop there. Ok, I may be a little biased, but they both have a really nice selection of the indies and it’s so great that they support us.

Looking forward to Word On The Street already! 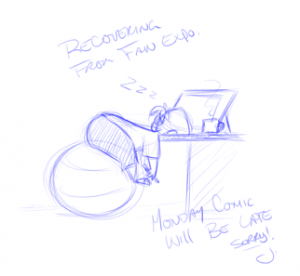