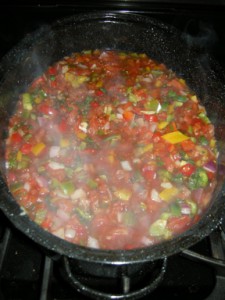 I think I may have gone a little overboard at the Farmers’ market this week.

I got there toward the end of the day so the vendors were cutting deals like crazy. I really didn’t mean to, but I ended up leaving with a case of strawberries, two baskets of peaches, six baskets of tomatoes, a basket of assorted bell peppers, hot peppers a basket of onions, corn and two quarts of blueberries. Oh, and the meats that the trip was supposed to be for. All this before I even got to the hot sauce shop, (The Salivation Corporation) which is where roughly a third of my annual income goes anyway.

Obviously, this was going to be another week of canning. I made more jam, (vanilla peach and strawberry), the blueberries have mostly gone to breakfasts, (so good with yogurt) and the bulk of the veggies went into a very large batch of salsa.

Now I just have to figure out how to make my own corn chips.

Salsa was actually the first thing I ever made and home-preserved. It’s pretty simple and I’ve had a lot of success with it. Makes a really nice addition to the Christmas gift baskets with home made cheese crackers or wonton crisps.

But this time, I’d like to tell you a bit about where I’ve gone horribly wrong.

For the record, I have a pretty good threshold for spicy food. I actually really like hot stuff so I tend to be pretty generous with the peppers. Any beginner canning guide will tell you to wear rubber gloves when you’re cutting hot peppers. The oils in the peppers will burn your skin. Although they use phrases like “it’s a good idea to wear rubber gloves”, it’s really not a suggestion. That stuff stings like hell for hours and no amount of soap and water is going to wash it off. What’s worse is that it transfers to whatever else you touch. If you rub your nose, your nose will burn, if you have to go to the bathroom, you’re taking your life into your own hands and for the love of god don’t pick up the baby if you have one.

I’ve been good about wearing my gloves, but it never occurred to me that the oils would be on the gloves when I pulled them off, so handling the gloves before I’d washed them left me with a pretty nasty case of hot paws.

When washing failed and I’d gone ahead and rubbed my nose, I called my Grandpa-sir who was a chemist before he retired. The solution was a bowl of white vinegar for soaking the hands and more on a paper towel for the nose. It worked pretty well, but took a bit longer than I would have liked.

My Mum says that sticking your hands in a bag of all purpose flour for a while works too. I’ll make a point of remembering that, but I really hope there isn’t going to be a next-time.