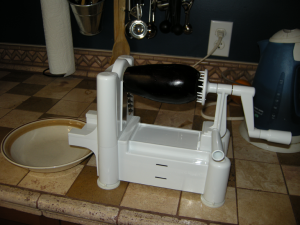 For the record, I’m not being paid or sponsored for this post but I should probably preface with a confession; I am a gadget junkie.If it chops, slices, spins, shakes, froths, whirrs and/or makes fries, I’ll take two! Chrome?! I’ll take three!

I don’t know why or where this compulsion came from, if it’s some kind of psychosis or if it’s in my damn DNA, but I probably could have retired by now with the money I’ve spent on Starfrit doo-dads. 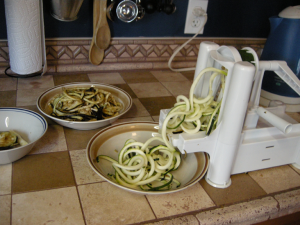 A week or so ago, my friend Andy got  a Spiralizer and was telling me about it. So really, I can’t be held responsible. She was waving the proverbial red cape in front of a bull. I couldn’t not-have one! To validate the expense, I told myself it would help get more veg into our diets and for once, my excuse generating capabilities have actually paid off!

The novelty alone is worth the price of the contraption. There are no straight vegetables left in the house because this thing is so ridiculously entertaining. Just about everything has been now been spiralized as well as a pile of new veggies that I wouldn’t normally buy but had to try out. 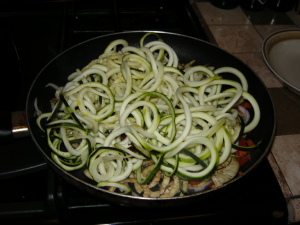 Zucchini makes fantastic “noodles”. Which is just about the best news ever for a lover of pasta with gluten issues. I’ve been making pasta-like lunches and enjoying them enormously.

The surprising thing about the veggie noodles is how filling they are. I can take down a giant plate of spaghetti, but I’m stuffed after less than a cup of these. So far, my preference is for sauteing the zucchini with some other mixed veggie noodles (beets, carrots, egg plant, onions etc.), and a little garlic and olive oil. I haven’t tried steaming or boiling them yet, but I’ve been told it works with a bit of salt. 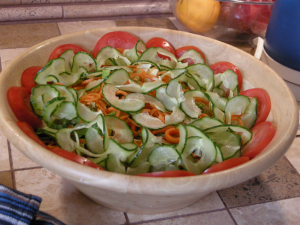 I’ve made some pretty garnishes for salads that were fun to eat. Having the raw vegetables sliced so thinly reduces some of the more overpowering tastes of things like beets, which I don’t love but know I should eat because they are so good for me.

Potatoes are also a good time. I read somewhere that you can also use them for noodles but I haven’t tried yet. Baked curly fries with some Tex-Mex seasoning were successful and freeze really well so I made a pile of those to have for week night side dishes. Of the varieties I tested, red potatoes worked the best for fries, baking potatoes were a little too soft and didn’t hold together very well. I even made sweet potato fries, which I still think are vastly overrated and gross, but marginally better baked than deep fried. Yukon Golds are great on the BBQ, but I’ll leave the foil open next time to get them to crisp-up a bit more. 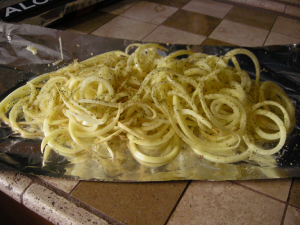 Preparing the spiral vegetables takes a bit of getting used to, it shortens your cooking time significantly, which makes sense but still requires a bit of trial and error. I had thought things like zucchini and eggplant would get slimy but they actually maintain their integrity pretty well. The eggplant less so, I think I still prefer larger chunks of that, but all in all, pretty good.