Next Time, I’m taking the Elevator

Back in April, I let the real-life Shanta talk me into climbing the Chedoke stairs in Hamilton. It’s 289 steps up the escarpment and she does this every Sunday, for FUN!

Okay, I’m just being snarky. In fairness, I had a good time. There were four in our little team and we couldn’t have asked for a better day. Sunny, breezy, not too hot, not too cold and everything was starting to turn green. We even saw a deer when we were doing our cool-down walk through the trails afterward. I knew 289 steps would be a challenge but figured could make it, and I did! Then Shanta said something to the effect of: “great, now five more times!” 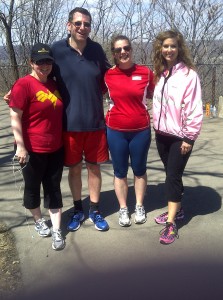 Oh yeah. She goes up and down hell’s staircase at least eight times AND does things like lunges and push-ups between each set!

There was no way I was going to make it up and down eight times but, with due sense of dread, decided I’d try for five.

By the third trek, my lungs were burning, my thighs were screaming, my legs were wobbling and I got passed by an elderly woman carrying a bike. About half way to the top, I looked to the nearest landing and saw Shanta, cheerfully waiting for me to catch up*. I wanted to call it quits right then and there. Send in a helicopter and air-lift me out, damnit! Without a trace of dignity or stoicism, I made it to the top and although my first instinct was to crawl to my car and have a good cry, Shanta took me through some stretching and got me to walk it out while they did their next round.

I’m a big believer in the importance of warm-up and cool-down, but was still genuinely surprised how much better I felt after a five-minute walk (more like a five-minute wobble actually, but why split hairs?). So, back down I went and back up I came and between each lap repeated the stretch and walk. It didn’t get easier, but I made it the full five climbs! Up five times and down six, for a grand total of 1,734 steps!

I can’t remember ever feeling so accomplished. I was stiff as a board for next week, but it was totally worth it.

*I admit it; for a moment, I thought about giving her a push… Just a little one.