I got my table assignment for Fan Expo this week, (P118! Woot!) and I’m looking forward to it enormously. It’s going to be a great show, I have the new book back in stock, Monstrosity is officially launching and I’ve been seated with a good friend and great artist, Jay Fosgitt.

Unfortunately, hot on the heels of all this great stuff, there’s been a resurfacing of some tired, old, “Comics are a man’s world” baloney, and it has a bunch of…less enlightened souls, chirping their guts out on the social networks (again), about all kinds of stuff that just makes me bonkers. The big one at the moment being the, “fake geek girls” argument. I can’t believe this is really an issue for some people. 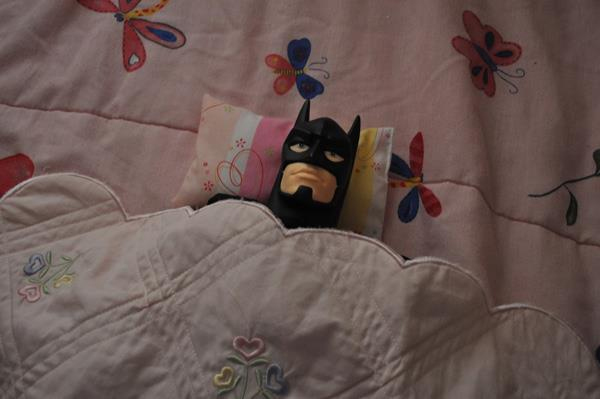 The coolest little girl I know is a Batman fan.
And when Gotham is safe, Batman gets his beauty rest, in style!

Apparently, girls only read comics and play video games to get attention from guys.

The same way that “guys only read Playboy for the articles”.

If you ask me (and nobody did), if someone, anyone, finds something that makes them happy, whatever it is and especially something so harmless, who are we to judge their motives? Leave them alone and let them enjoy it. (duh!)

Anyway, it was all so stupid I had to pull the comic I was going to post today in favour of this one. I hope a little humour helps to illustrate how ridiculous this argument is.

Be who you are and say what you feel,
because those who mind don’t matter and
those who matter don’t mind.
~Dr. Seuss