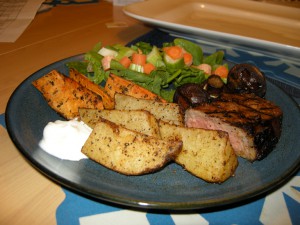 The latest Food Revolution Recipe of the Week is Potato wedges.

Potatoes have gotten a bit of a bum rap since the low carb movement. Yes, they are a heavy starch, but not all starches are created equal and being an un-processed product of nature, they’re loaded up with lots of good things our bodies will find useful. That is of course, when they’re not deep fried and coated in salt and whatever other mystery “crunch enhancers” that go into the manufacturing process.

In fact, not all potatoes are created equal either. I got Good Eats: The early years out of the library (I know, I’m one of maybe eight people left in North America who still uses the libraries but I love them), Alton Brown talks a bit about them in “This Spud’s For You” (season 1 episode 2 of the show).

“A potato’s cooking characteristics depend greatly on it’s starch content. There are three basic categories of potato:

HIGH-STARCH, or mealy, potatoes, such as Idaho Russet “baking” potatoes, and purple-skinned Caribe potatoes, are ideal for baking because they fluff—and yes, that’s a technical term. They’re also good for French fries, but because they fall apart, they’re lousy for roasting of boiling for potato salad.

MEDIUM-STARCH potatoes, like Yukon gold and Yellow Finn, will hold their shape when cooked but just barely—which makes them perfect for layered applications like gratins.

LOW-STARCH, or waxy, potatoes, which include round white and round red (boiling) potatoes, as well as most fingerlings, do not fluff and hold their shape when cooked. Hash, potato salad, and pot roast are good applications.”

Personally, I like the low starch red potatoes. They’re more flavourful than their starchier brethren and are great on the grill. 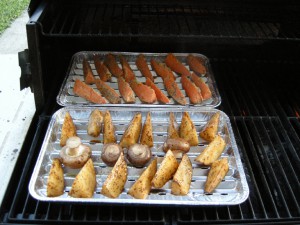 Speaking of the grill, that is how I opted to take on the potato wedges this week. For extra points, I tossed the baking potatoes in smoked paprika and cayenne pepper. After my rail against sweet potato fries a few weeks ago, I thought it was only fair to give them a shot on the grill too, but I tossed them in a generous tablespoon of butter and my own mix of herbs (It’s basically Herbs de Provence minus the lavender).

If you have a grilling basket it would work for these, I don’t, so I got some BBQ Buddies Grill Top pans (super cheap, you can get them at almost any grocery store), and they worked out just fine. If you’re going to do wedges or other vegetables on the grill, you want to use indirect heat (turn on the burners that aren’t under your veg to heat up the barbecue), or the bottom will scorch. It takes a little longer than in the oven too, about 35-45 minutes, but they really absorb the smokey flavours of whatever else you’ve got on the grill—delicious.

The last thing I will say for potato wedges is that they freeze nicely and re-heat the same way you would a bag of store bought French fries. Preheat the oven to about four hundred and fifty degrees, lay them out on a baking sheet and in they go for twenty to thirty minutes. Easy-peasy!