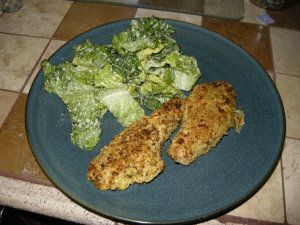 Crunchy Garlic Chicken with Caesar On The Lighter Side

Last weekend I took a run at my second recipe on the Food Revolution’s Get Cooking page – Crunchy Garlic Chicken.

I have attempted fried chicken in the past with little success. I’ve tried coating with bread crumbs, panko and once with cornflakes thanks to a recipe that must have escaped from the gallery of regrettable food. This is not a fried recipe, it’s baked but still the first time I’ve ever used saltines for coating and it was really good. Light, crunchy and the meat was still nice and moist inside. If I had to give a criticism, it’s that I didn’t love the lemon in the mix. That’s just an issue of personal preference though, this coating is so simple it can be diversified really easily. I tried it a second time with oregano, basil and dried red pepper instead of lemon and that hit the spot for me.

I’m not a big meat eater these days, so I did a little experimenting with coating and baking an eggplant and that was fantastic! Sprinkle a little parmesan on those bad boys and serve over whole wheat pasta, I may never fry an eggplant again.

The other thing I got to thinking about was the convenience of those big boxes of frozen chicken fingers that the kids I know like so much.  A lot of those are actually made from low grade meat and fillers, mulched up and coated in salt and chemical plant floor sweepings. So I made up some extra Crunchy Garlic Chicken to freeze and see how well it did as a convenience food. In fairness, when you’re comparing re-heated home made food to pre-packaged processed food the bar isn’t set very high, but using almost the same heating directions as the pre-packaged chicken fingers, (from frozen, 425 degrees for 15 minutes on one side, flip them and bake for another 10-15 minutes on the other) these came out beautifully.  They were a little drier than when served freshly made, but nothing a little marinara couldn’t solve.

The eggplant on the other hand…Let’s just say it’s better served fresh and if you’re going to use the leftovers, chop them up and hide them in a lasagna or some place that texture can be disguised. (blorg!)