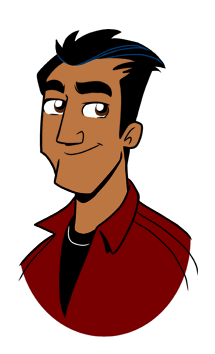 Introducing the newest edition, and first official dude of the Promises Promises cast, Lance LaChance! Oddly enough, he’s the only one with a surname, to date.

Lance also has the distinction of being the only character who’s design is not based directly on anyone I know. (Although, there are some similarities to my brother and that guy I married. Mostly in his height, hairline and jaw.) Consequently, I’ve been struggling with his design for ages. It felt like everything I did was way overboard, forced or stereotypical (IE. every guy I’ve drawn in every strip since the gym went co-ed), and I’d like him to be more than a spider-squashing, pickle jar opener.

I like him, he’s a nice, middle-of-the-road guy who brings another warm palette to the colour scheme. (I mean that artistically and multi-culturally. Not that it matters much in a black and white strip.) He’d be really easy to put into weight-training roles, but I think he digs Zumba too.