Got to running down my list of To-Do(s) for the long weekend. This one’s a big deal in our household, it’s Thanksgiving plus three birthdays. Lots of family, lots of food. This is my year to host. I like hosting family dinners, I like to cook and if I’m not into the conversation I can busy myself rather than rudely tuning out some body’s play by play of local sports or baby-diaper situations. (Smile and nod only gets you so far.)

Also, with the new house it’s a bit of a warming party…Well, it would be except we had a little drama. (What’s a holiday without a little drama?) We discovered a hole in the roof. By we I mean “He” actually discovered the hole in the roof, my half of we just noticed it’s been raining in here. Not to be boxed-in by conventional inspection practices, like say…looking at the roof, my sweetie went through a couple of walls and up, to find the hole. 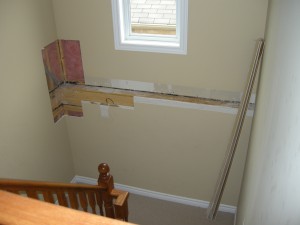 Which is not a criticism, he found the problem and thanks to one of my friends/clients the hole has been fixed and the stairwell will make for dinner conversation, I’m sure.

Back to my original point, the roofing drama plus a couple of client quick-fixes torpedoed my “no shopping after Wednesday before a long weekend” rule. Thankfully, my Dad picked up the turkey from the farmer’s market today but that means tomorrow I have to do the rest of the groceries.  I can’t possibly be the only person terrorized by holiday shopping. Personally, if it comes down to getting tackled by an elderly woman, (don’t be fooled, those elbows are sharp) for thirty cents off a bunch of asparagus or planning ahead and paying the extra buck for sanity and cart space, I’ll spend the extra buck! This is also why I’m a big fan of online shopping.

Not this year. This year I will officially be one of those jerks in the mall. Hot coat, stuffed cart and bumping into other people because I’m crossing things off my list(s) instead of watching where I’m going. Then, after forty five minutes in line and some snotty remark from an over-worked cashier, I’ll trundle out to the car, get in and remember that one thing that will make or break the entire day that I forgot and have to go back in while the ice cream melts in the trunk. Awesome.

It’ll be worth it in the end, we always have a good time. But part of me wonders if they’d notice if I booked a flight to Aruba and just left a post-it marked “cook me” on the turkey?