I don’t think I could have asked for this weekend to go any better than it did.

Kazoo Fest was a ton of fun. I’d do that show again for sure. The people were awesome, Brian and I were tabled with Adriana Blake. She’s as cute in person as she is in her strip; Fall On Me. They put on a good show and an even better after party.

The Royal City Roller girls were there and I got to chatting with some of them. Now I have to go check out roller derby. It sounds like SO much fun and really not like the ultra-violent, bootie-shorts and fishnets stereotype. Apparently there is a Forest City league, so I’ll have to track them down.

Sunday was the big Artist’s Help Japan fund raiser in Toronto. They put on an amazing show. I don’t have the tally numbers yet but everyone was so generous I’m sure it’ll be impressive. It really was an honour to be involved.

I am very sorry to say that my photos did not turn out from either event. I’m going to have to mess with my camera settings. I pillaged some from other people’s Twitter feeds to post on the Promises Facebook page, but if anyone has pictures they wouldn’t mind passing on, please drop me a message, I’d love to see them. 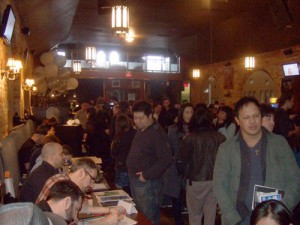