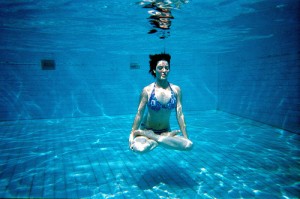 I haven’t spent much time in the water since college. I lived in a building that had a pool and took the opportunity to do an hour of laps a few times a week…when I wasn’t horsing around in there with my friends that is. I’m not really a swimmer. If given the choice, I’d rather put in the hour on a treadmill or in cardio-boxing. These days, any lengthy soaking for me is done with minimal movement, at about 104º and preferably, bubbly. (Aahhhh)

Yesterday, I took my first run at Aqua Yoga. Like many things in life and fitness, it’s harder than it looks (particularly, when I find myself outclassed by the octogenarians, once again). I had thought that the water would make it easier to balance myself, but it’s quite the opposite. Parts of me want to float when they’re not supposed to and the rest of me seems to want to sink when I need to breathe. Leg goes up, face goes down, pretty easy to spot the flaw in that pattern.

For the most part, I enjoyed the hour and would recommend trying it. The instructor had piped in some relaxing music and the water was temperate and comfortable. It was a good stretch and after my Military Muscle session on Tuesday, I was in need of one as well as a bit of low-impact work (I’m still sore, and kinda dreading next Tuesday). It’s slow, but challenging enough that it doesn’t get boring. My only complaint, and I can’t really even call it that, was that Aqua Yoga didn’t feel like a workout. That would actually be a bonus to some people but, I hadn’t succeeded in getting my heart rate up and I was pretty restless after. Fortunately, there wasn’t a class or anything following ours so I stayed and did an extra 20 minutes of laps. I could see it being a great class to take after a half hour run, to cool down and stretch out, I may try that next time.